As the cost of 3D printing has further declined, the potential use of applying it to robotics projects has increased. John Blankenship, a senior editor at SERVO Magazine, wrote an article titled "3D Printing for Robot Projects" in the latest issue of the magazine in 2019, which used the DOBOT MOOZ as an example to describe how to use 3D printers in robotics applications and how to choose the right 3D printer for your personal workshop.

As early as 2017, John Blankenship wrote an in-depth unpacking article for DOBOT Magician and published it in the March issue of SERVO Magazine. John detailed the Magician's end effector tools, drawing and engraving, I/0 ports, 3D printing, teach and playback, DobotStudio software, programming, and other functions. He gave an objective evaluation of DOBOT Magician as a robotic arm with decent specs and a reasonable price. 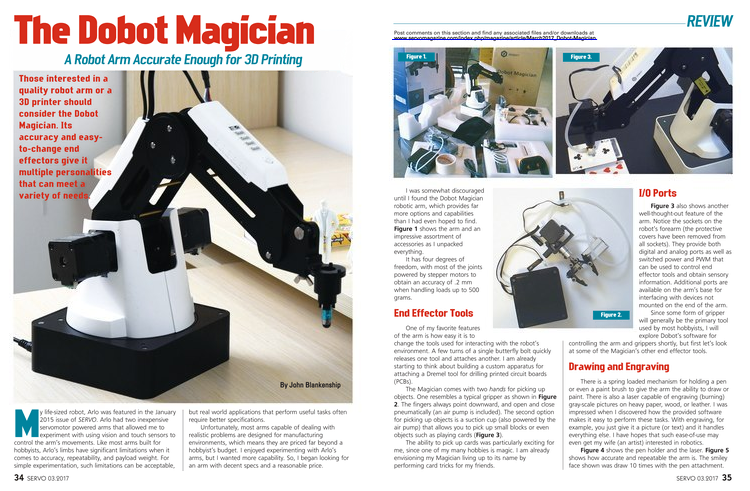 Dobot Magician on Servo Magazine in 2017

“If you only want a 3D printer, the Magician is probably not a good choice because there is so much competition…If you have been thinking about purchasing a quality robotic arm though, and you want/need something better than a typical servo motor powered hobby arm, then you should check out the DOBOT Magician. It’s like buying a great arm and getting the printer for free. Even with a price tag around $1,000, its many tools and features make it worthy of consideration. ”

Two years later in 2019, John wrote down his experience of using 3D printers for robot projects. He believes that 3D printers can not only be used to customize small parts but also can support bigger and more sophisticated projects: individually model and print parts and then assemble them into a desired overall model. The 3D printer used by John for his robotic application is MOOZ-2 from DOBOT. He said: “I’m very happy with my Mooz-2 printer. It comes in two models (Mooz-1 and Mooz-2, actually DOBOT has now introduced Mooz-3 which supports mix-color printing), but either should produce the quality prints shown in this article. The Mooz-2 has one extra motor to handle the extra weight and torque needed for an optional CNC carving attachment.” 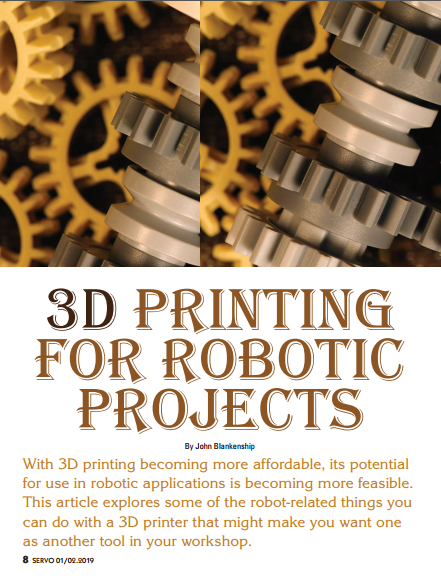 DOBOT MOOZ for Robotic Projects on Servo Magazine in 2019

John believes that Amazon's review comments are helpful when it comes to evaluating the performance of the 3D printer. The first consideration is the size of the printable area. For the items John wants to print, the MOOZ area of 13 cubic centimeters is just enough for his project. The print speed and quality of different 3D printers will definitely vary, but most printers designed for enthusiasts perform similarly in these factors. The second one should be considered by the 3D printer manufacturer. Many 3D printers are produced in China, so the support provided by different manufacturers varies greatly.

John mentioned in the article that “MOOZ support has tried to provide appropriate documentation (including numerous YouTube videos)” and urges all foreign 3D printer manufacturers will spend more time in the future translating their documentation to English. In fact, DOBOT also provides a dedicated community on Facebook for 3D printing enthusiasts to communicate with each other and share their unique experiences. But one thing is for sure, no matter which 3D printer is chosen, users should always be prepared to spend time doing the research if they have any questions.

At the end of the article, John concluded that for many amateurs, 3D printing is still a luxury. However, he believes that 3D printing will become more popular in the near future. The reason why he is dedicated to sharing these project-related applications is to prove that implementing 3D customization is much easier than ordinary people may imagine. John is already immersed in 3D printing and is looking forward to generating more new ideas to complete his robot project. In addition, John also hopes that more people will try to use 3D printing to explore more possibilities.

About the SERVO Magazine

SERVO Magazine is a bi-monthly robotics publication produced by T&L Publications. The first issue appeared in November 2003. It is dedicated to the “Next Generation of Robotics Experimenters”, devoted 100% to robots and robotics. With an all robots focus, each bi-monthly issue will inspire, educate, and entertain with feature articles, interviews, tutorials, DIY projects, hacks, parts sources and much more.