Beijing, China, August 22, 2019 – Today, the managing committee of Global Final of DOBOT Intelligent Manufacturing Challenge 2019, which was initiated and sponsored by DOBOT, announced its champions in primary school, middle school, high school and university group in Beijing. This year's final gathered entries from 580+ contestants from all over the globe, with 126 teams from 20 cities of 5 countries including Russia, South Korea, Japan, and China. 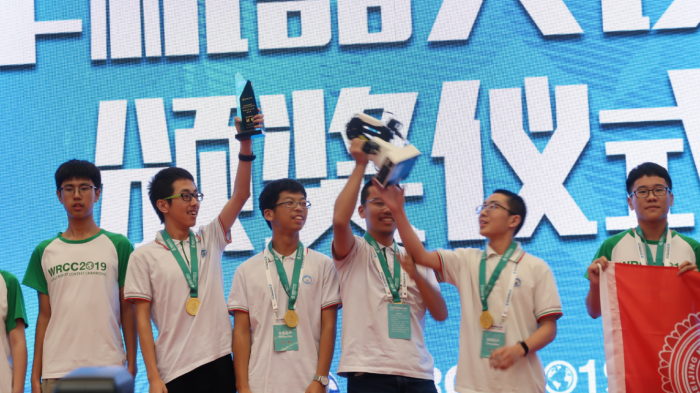 DOBOT robots designed and programmed by No.1 Primary School of Zibo High-Tech Industrial Development Zone, Jiangbei Campus of Nanjing No.1 Middle School, Baoding No.1 High School, China, and Muroran Institute of Technology from Japan defeated 35, 32, 40, and 18 rivals respectively and won the competitions. CEO of DOBOT, Jerry Liu, presented the trophies to these four prominent teams.

Researches show that 40% of jobs will be soon be automated. The more that robotics is included in education, the better prepared the students will be to enter the workforce where they will likely be working with a robot. The annual robotics competition was launched in 2017 by DOBOT and is designed to bridge the gap between the present and the soon-to-be reality future for students where robots and humans will be working side by side on problem solving, process improvement, production line, retail and much more.

The DOBOT Intelligent Manufacturing Challenge - Transport Challenge simulates production scenes in intelligent manufacturing, and the intelligent program controls the collaboration between robots and intelligent self-driving vehicles to complete the loading, unloading and sorting of materials. The vehicles transport materials according to their category, and then unload them to the corresponding area. The 2.5-day competition consists of two preliminary rounds and one final.

The instructor teacher of team Zibo Liuquan Middle School from Shangdong province, Mr. Wang Fuxin, said, "This year we have seen a lot of excellent contestants. As much as we are the winner of Shangdong Youth Robot Competition 2019, coming here, we find that we still have a lot to learn.” He added, “The competition is to test students’ comprehensive capability in intelligent vision, auto-driving, robotics system, and route optimization. To complete the task, contestants need to make sure the robotic arm is integrated with properly-working photoelectric sensors as well as color sensors. We went a bit panicked when we sensed the lighting in the stadium might affect the sensors, but one student's quick wits saved our day. By using an umbrella, the lighting worked out perfectly for us.”

Muroran Institute of Technology in Japan claimed the champion

This Japanese team of four stunned 40 teams in their home country to make it to Beijing. When asked how they finished the competition nicely and stayed ahead of other teams, Ms. Komukai Yoshimi, contestant & student from Muroran Institute of Technology answered in a confident and calm tone, “We were not nervous because we made enough adjustments before the competition. Also, we could get stable high score during preparations.” Despite their calmness and focus, they did run into some roadblocks along the way. “On the second day (the second round), we found a bag of materials not parked by the parking line because the IR sensor for detecting the vehicle had detected protruding battery cable from the vehicle. In order to fix this, we did debugging until 2 a.m. on the final day!” The reigning team attributed their success to their passion for robotics, teamwork, ambition and readiness to rise to new challenges.

In addition to the champions of this 2019 DOBOT Intelligent Manufacturing Challenge, Brilliance Award and Versatility Award were also awarded to a few outstanding teams as a sign to honor their incredible work and encourage their sustained love for robotics.

Founded in July 2015, DOBOT is a global leading provider of all-perceptive intelligent robotics solutions, focusing on the development of all-perceptive intelligent robotic arms that integrate perception and interaction. Thanks to its remarkable breakthroughs in vision, control, servo drive, and robotic body, DOBOT products are selling in more than 180 countries and regions around the world, widely used in education, industry, and business. Globally, DOBOT has an extensive network of over 100 key distributors, servicing over 200,000 users today. DOBOT was named one of the World's 80 Most Valuable Robot Companies by CB Insights, ranked among the Hurun Top 100 Most Valuable New Star Enterprises in China, and the Top 80 Artificial Intelligence Companies in 2018.